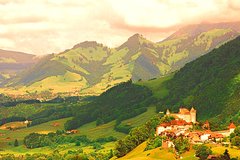 Not just another city tour! But a two-hour immersive medieval experience. You will be fascinated by all the legends and stories of the past. Proudly perched on top of a forbidding rock, the rich heritage of Gruyères medieval city is thriving. Ancient trades, forgotten celebrities and truculent characters will come alive with Georges, your cultural guide, historian and storyteller.

From the marketplace to the surrounding mountains, you will learn about the harsh and noisy life of medieval times. During middle age, economic and social life was influenced by epidemics and wars. All of these misfortunes left their mark, just waiting for their story to be told. During this fascinating tour, you will also embark on a secret discovery of one of the best but least known of Swiss cheeses.

With a gentle stroll along ancient cobblestones, passing historic buildings and fountains, you will discover how life really was in the middle ages. Ancient trades forgotten celebrities and truculent characters from the past will come alive. Economic and social life, epidemics and wars have all left their mark waiting for their story to be told.

Book rating: 5 out of 5 with 1 ratings
This site uses cookies: Find out more.