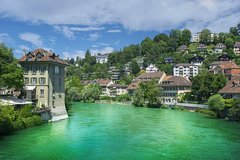 Visit the city of Bern and explore the historic areas of the old town with gothic architecture and medieval monuments.

A 13th century medieval tower which is a part of UNESCO cultural world heritage site.

A fountain with hexagonal basin which is situated on the bear square and the floor being of sculpture Novarra.

This is also known as the Federal Square and is the government plaza, which also happens to be a UNESCO cultural world heritage site.

One of the oldest monuments of the city and a medieval landmark tower, consisting of a 15-th century astronomical clock.

Surrounded from three sides by the river aare, the medieval old town depicts the construction and architecture of 12-th to 15-th century.

Stop At: The Cathedral of Bern, Münsterplatz 1, 3000 Bern, Switzerland

The tallest cathedral in Switzerland built in the 15-th century, representing the gothic architecture.

Most important medieval church in Switzerland. The Münsterkirche is a renowned travel site with great architecture.

Replaced by the old fortress, this church is features a bell tower with four corner towers where the church choir stands.

The bear has served as a symbol of Bern since a long time. This bear pit, used to house bears in the early times and is regarded as a popular tourist spot.

Stop At: The Rose Garden, Alter Aargauerstalden 31b, 3006 Bern, Switzerland

The beautiful parks of Bern, consisting of various varieties of roses with view of the historic old town.