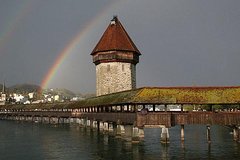 Discover Lucerne on a two hours comprehensive city sight seeing walking tour covering all “must have seen” attractions. In addition explore the hidden spots of classic, medieval and modern Lucerne. See the Lion Monument, climb the Musegg Wall and Towers, admire the medieval houses and fascinating murals of the historical center and enjoy an inside visit of the Ritter Palace with its profound “Danse Macabre”.

Your tour starts and ends at your Hotel in the City of Lucerne.

Meet your Local Guide in the lobby of your Lucerne hotel.
After a brief introduction and explanation of the route on a city map you walk or take the public bus (free for Lucerne overnight guests) to the Lion Square.
You see the Bourbaki Museum from the outside and get a short overview of the story behind it.

A few steps further you visit the Lion Monument commemorating to the fallen Swiss Guards during the French Revolution.
At the end of the middle age and the beginning of the modern times many rulers all over Europe had a personal Swiss Guard, as the Pope still has.
Then came the enlightenment, which lead to the French Revolution starting 1789. Three years later the angry mob of Paris attacked the French Kings Palace in Paris and about 800 Swiss Guardians got killed in action.

A leisurely ten minuts uphill walk takes you to the Musegg hill where you visit two of the Musegg Wall and Towers. You learn about the ancient fortification wall which dates back to the early 15. century. You climb Schirmertower, take a walk along the defense walk and climb to the top of the Clock Tower.
You feel transported back to the Middle Ages and enjoy a beautiful view over the city, the alps and the midland.
(From November to March the Musegg Wall and Towers are closed and can be visited from the outside only)

You continue to the heart of the Old Town and see the medieval houses with their façade paintings at the Stag Square (Hirschenplatz).

A few steps further on the Town Hall Square (Kornmarkt) you see the Town Hall and Tower dating back to the early 17th century. You learn about the impressive clock, which does without minute hand.
A stone throw further you reach the Wine Market (Weinmarkt), which once was called the Fish Market. You learn why the old city fountains carry the best spring water of Lucerne and you will taste it yourself at the oldest fountain in the city.

You pass the lower Wine Market where once a pillory stood and you cross the river on the Reuss Bridge (Reussbruecke). There you see the river Reuss, the needle dam, the mill bridge (Spreuerbruecke) and two of the Musegg Towers.

A few steps further you reach the Ritter Palace (Ritterscher Palast) for an inside visit. You learn about the history of this florentine Palazzo dating back to the 16th Century. You are guided through the “Danse Macabre” a seven paintings gallery by Jakob von Wyl. (except on Saturdays, Sundays, Holidays and Special Events when the Ritter Palace is closed and can be visited from the outside only).

Next you come to the 17th century Jesuit Church, the first Baroque church in Switzerland. Your Guide explains the story behind it before you have the possibility to enter the church and see it from the inside. (Inside visit is restricted during mass services).

A few steps upriver you cross the famous Chapel Bridge (Kapellbruecke) with its Water Tower. You hear interesting details about this former city fortification bridge with its paintings and the Water Tower wich once used to be a prison.

Your tour ends at Rosengart Platz next to St. Peters Chapel, the first church in town dating back to the 12. century. You see the Zur Gilgen House, the first private stone house in Lucerne dating back to the early 16. century.
Finally you learn why the Chapel Bridge is called Chapel Bridge.
Your guide is available for further information about Lucerne and takes you back to your hotel by public transportation or on foot.